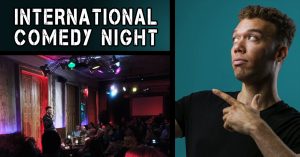 REGINALD BÄRRIS is an American stand-up comedian currently based in Vienna, Austria. A biracial American abroad, Bärris offers a unique perspective as he blends cynicism and silliness to effortlessly deliver his densely packed punchlines about race, religion, patriotism, his own foibles, and the world at large!

One of the fastest rising up-and-comers in continental Europe, Bärris is quickly making a name for himself in international circuit. Since appearing on the scene in 2016, Bärris has performed at several major international festivals (Sziget Festival, Utrecht International Comedy Festival, and more) and headlined 60+ cities in more than 20 countries across Europe!

After numerous wildly successful European tours in 2019, Bärris is returning on his new “Take That, World” tour! His last 7 shows in Stuttgart sold out in advance, so get your ticket now and don’t miss your chance to come join the fun! Grab your friends and Treat Yourself to English stand-up comedy!

★★DISCOUNT TICKETS FAQ★★
Save some cash by sharing this with your friends! If you share this event in your news feed AND tag some friends that you think would be interested, you can get a 2€ discount off your tickets! Just take a screenshot of the posts and send them to Reginald Bärris Comedy to receive your special discount code!